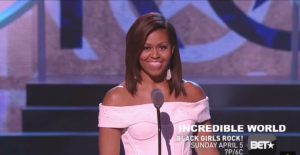 I think I know why you are mad. You are not used to seeing other women rock because for centuries you’ve been told that only you do. Perhaps it is jarring to see that other people exist beyond being your sidekicks, model minorities, imaginary friends and false stereotypes that promote the myth of your supremacy. You see, unlike you, for 400 years Black women and girls have been told we don’t rock. Heck we’ve been told a lot worse. The thing is you’ve never known how it feels to be a Black woman in America. So this post is my meager attempt to show you.