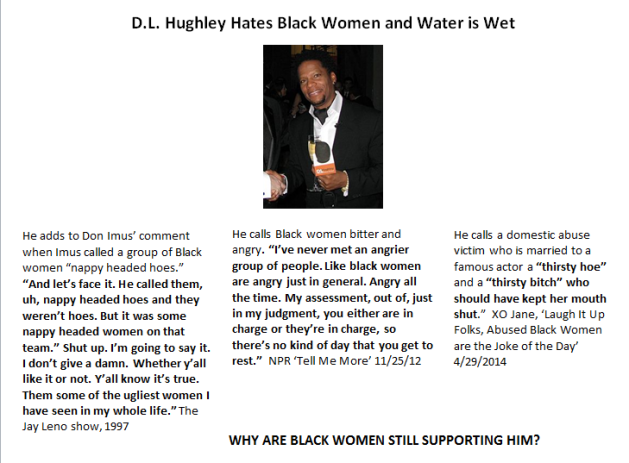 Columbus Short and his wife have been in the news lately. She alleges that Short committed domestic violence against her. According to an article from XO Jane not only does Hugely on his show ignore the allegations of domestic violence, he tries to excuse the behavior, and  then he goes on to shame and silence the victim. The post  from XO Jane says, “Not once did Hughley, a father of two daughters, give any weight to the allegations. Not once did he seriously denounce domestic violence or consider that Short’s wife was in very real danger. Instead, he called her a “thirsty hoe” and a “thirsty bitch” who should have kept her mouth shut.

“When you’re very young, you’re very volatile,” Hughley said. “I’ve been in situations where the police were called. I don’t believe that every time someone says something in the heat of anger, they actually mean it. Everybody want a thug dude, a passionate dude, until you gotta live with your mother in an undisclosed location. You know what kind of dude you picked. Stop it.” Sanders chimed in and said, “I don’t think that’s always the case.” Hughley’s response? “Well, you’re dumb.” Read the rest of the article here.

Yes D.L. Hughley called a domestic violence victim a “thirsty bitch” who “should of kept her mouth shut.” We here at BBG are not surprised. I have written several posts about him.

The question is why is he still employed and why are you still supporting D.L. Hughley? Hasn’t he shown Black women time and time again that he doesn’t deserve your respect. He only wants your money. He’s called Black women “nappy headed women” and said “they were “some of the ugliest women I have seen in my whole life.” He has called you angry and now he is trying to shame and silence a domestic violence victim. What will it take?

The next question I have is why is racism unacceptable but raciomisogyny acceptable? Is it supposedly different because the raciomisogynists are Black men? Well it is not. It’s worse because it’s coming from your own.  It shows that your own kind hates you.

Let me tell you something, hate is still hate. Bigotry is still bigotry and abuse is still abuse. Regardless of the source and you deserve better. Sis enough is enough.