BBG - Angelica is an African American woman from Detroit (the “D”) but an Arizona exile who writes about her experiences of living in Saudi Arabia. Angelica describes herself as a Mama, Wife, Activist, Educator, and Artist. I will include a wonderful person.  This was originally posted at JeddahMindTrick.com. Please enjoy her piece on racism in Saudi Arabia. 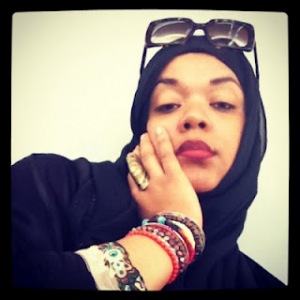 Deciding which job a person is best suited for is as easy as looking at someone’s passport. In America, it is often the color of one’s skin, or the breadth of one’s nose, or the texture of one’s hair that serves as the criteria for delegating tasks. But in Jeddah, a declaration of nationality can mean the difference between feast and famine for those endeavoring to find work.

As an American, I am expected to work somewhere along the upper tier of the workplace hierarchy. Arabs know that Americans are superior to us, one of my students forthrightly asserted. I winced a bit as she made the statement, wondering how such a brilliant teenaged mind could be so complicit in declarations of cultural superiority, particularly when she was on the weaker end of the assertion.  When I took my position at the school, I was unaware of how deep the racial divide went. It was almost a year later when I learned that the micro-aggressions I endured every day were emblematic of an overall feeling of hidden disgust at anyone perceived as “other”.

When I saw Lulu’s tears, I couldn’t quite process what I was seeing. Moments earlier, I had suggested that we place a helper in the nursery to replace a worker who quit a week earlier. In the interest of this discussion, I have to disclose that the woman who quit was Arab. The woman I suggested as a replacement is from Tchad, with a complexion the color of freshly brewed black coffee. She is a tall slender woman, with an aquiline nose and dainty features, whose mouth always seems on the verge of a smile. Her skin is like stretched canvas and belies her age. Her weathered hands, however, tell the story of a woman who has lived quite a few decades, harsh ones at that.  I always enjoy passing her in the hallways, though we never speak a word to each other. My Arabic is too limited to say much beyond sabahil khair (good morning) and she seems to have figured out long ago that she would never be able to keep up with my rapid fire English.

Once, she asked (through a nearby teacher who translated for her), if I was from Senegal. She noted my long indigo dress and commented that I wore my hair and clothes just like Senegalese women. I told her that I was from America and this fact seemed to both surprise and amuse her. I was not born on the continent, but I am an African, I replied. This statement made both of us smile, and from that day on, we shared a mutual respect expressed through kind glances, smiles, and an occasional nod of the head at the first greeting in the morning.

I had heard from Lulu that she was the mother of 8 children. When the nursery worker quit, the Tchadian woman, Hawa, was the most likely replacement in my mind. I hated seeing her pushing a broom, cleaning toilets, and picking up after children too careless to throw trash in the bin, so they discarded it on tiles no more than 3 feet from the closest receptacle. Lulu had actually been the first to suggest that she replace the missing worker just a few days before, but my suggestion that morning seemed to throw her into a crying fit.  This is not fair, she said. You can’t do this to us. What am I doing, I replied. She is more than qualified and her gentle way is perfect for the babies. No, this is not right, she rebuffed. Why must you do this to us, she said again, this time more firmly. I could not understand why my suggestion, one that she made first, was so upsetting to her. We want Malaak, she would be better, she added.

Better. That was the word I was dreading. When she uttered that word, I knew why she was so resistant to Hawa. She was not good enough. A day or two before, Lulu had been privy to a conversation I had with another teacher with a young child in the nursery. When I told her I thought of a replacement for the absent staff member, she immediately asked: What is her nationality? Why does this matter, I shot back. Because I think Indonesians and Filipinos are best, the teacher said. (note: Filipino and Indonesian service workers are highly sought after. They are also subject to high degrees of discrimination and racism. They make up part of the unspoken “servant caste”.  It is sickening.) I don’t agree, I responded. The ‘best’ person is one who will show up to work and care for the children in the same way a mother would. Where a person is from shouldn’t have any bearing on that, I said.

She seemed dissatisfied with my answer but nodded a reluctant agreement. Now here I was, standing in front of a bawling woman who thought that I was trying to assign someone who is not “the best” to care for her child. They will take her to clean, Lulu said. It seemed that cleaning was all the African maids at school were good for, based on their work assignments. They were never asked to do anything other than sweep up behind others and were often regarded with disdain by the very children they were assigned to maintain.  I caught a 5 year old child one day shaking her finger in the face of an African woman old enough to be her mother. I stopped her short and chided her for being disrespectful. The look of astonishment showed that she had no idea what she did wrong. The look of surprise from the teachers who witnessed my chastisement showed they had no clue either.

I do not think Lulu is a racist. All of our interactions have shown her to be a kind and very respectful woman. She has never shown racial preference before. In fact, she is one of the few people who speak to the African workers at school and she is always curious to learn more about here people are from. But, like many people, she has been conditioned to subconsciously view anyone who is “other” as being deficient, or less than. I don’t even think she realizes how our interaction weighed heavy on my mind. In the end, we didn’t place Hawa in the nursery. The school hired a new worker, a Filipino woman.

In the racial spectrum of Saudi Arabia, I exist somewhere in the middle. My skin is light compared to other people of African descent. The variegation of blood in my veins has given me a skin color that frequently causes me to be mistaken for a Saudi woman. It happens at least once a week, especially when I walk in the streets with my black hijab tightly hugging my chin. Even those who know I am Black tend to look past the kinkiness of my short afro and instead refer to me as the “American” one. Somehow the geographic location of my birth means that I am not subject to as much ridicule as other people of African descent.

My husband and children fare differently, however. Both of my children are blessed with dark brown skin the color of toasted almonds. They are a perfect mix of mine and my husband’s complexion. My son looks just like his grandfather; it is easy to see the evidence of his Dogon heritage in his features. My daughter, however, takes after her uncle. You can see it in her broad nose, gap toothed smile, and piercing eyes. Anyone who sees them knows that they are African children. They have an appearance not unlike the hujjaj that traveled from Mali with Mansa Musa centuries ago. I may be biased, but they are superbly handsome children.

Unfortunately, their skin color and proud features are the source of derision for absentminded Jeddawis who call them Sudani and zinji. (sidenote: to be called Sudani, or person from Sudan, is used as an insult in Saudi Arabia. Sad but true.) The children do not know what these words mean, but my husband and I do. It seems to bother Mohammed but he is resigned to the ignorance in a way that a beekeeper becomes intimately familiar with the constant buzz of his charges. He becomes angry anytime it happens, but the emotion is usually fleeting. They don’t know any better, he says. Many of them are just as dark as I am, he recounts. But the taunts eat away at my core.

Once, at the end of a lazy day at the beach, a group of young Saudi teens hurled racial slurs at my family, thinking themselves concealed by their use of Arabic. My husband heard and translated for me. Their language was peppered with so many racial expletives, I can’t remember them all. I don’t want to. I immediately became enraged. From my vantage point in our elevated cinderblock gazebo, I wanted to drop hot coals on their heads, leaving them with black scars so that they too could know the sting of having “burnt skin”. In my minds’ eye, I ravaged them with words and flailing limbs and rapid fire blows. But in my shocked reality, I did nothing but try to hold back tears.